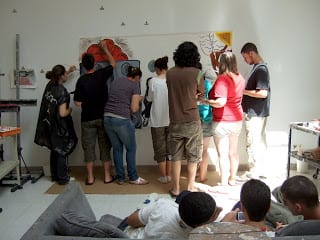 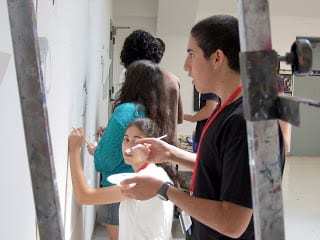 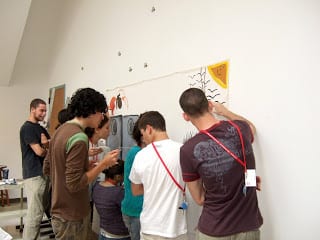 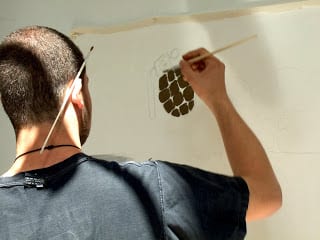 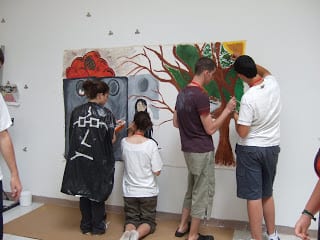 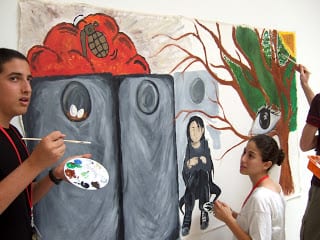 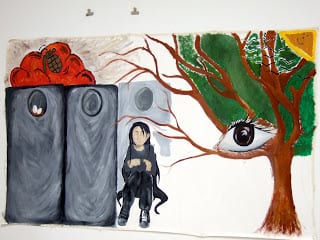 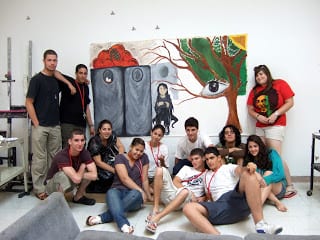 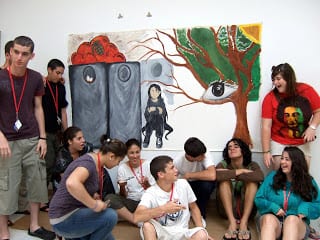 Today the kids began a large group mural as a collaborative art project. It was one of the most amazing art experiences I’ve ever witnessed. The kids were faced with many challenges and I deliberately stepped back a bit to see how they would come together creatively. Challenges to address included: how do we begin? how do we all paint on a canvas that isn’t large enough for all of us to paint on at the same time? should we have a theme? how should we execute the theme if we do have one?

In the beginning many of the students looked to me to tell them how to start, but I gently encouraged them to speak with each other and come up with a plan that included everyone and made everyone feel good. As I receded into the background for a while, I watched as the Palestinian and Israeli teenagers came together on their own, and began the mural.

The next two hours were astonishing to watch. They came up with a system so that everyone would rotate and have time at the canvas. Where one left off, another began. There was no fighting and everyone seemed genuinely happy with the direction that the mural was taking.

Without any prompting from me, they decided to create a mural that addressed the conflict as well as the dream of peace. In the middle is a girl, who they call “the dreamer.” She lives on one side of “the wall” which is represented by the grey areas and the bombs bursting behind it. To the right is her dream – of a peaceful time. A beautiful tree with an eye symbolizes what “the tree sees everyday, but is unable to speak of.” The tree is beginning to reach over to the other side of the wall, and seems to be forming a protective canopy over the dreaming girl.

Metaphorically I could not help but see the stretched canvas as a symbol of the disputed land and the conflict between the Israeli’s and Palestinians. Here the teenagers were presented with a relatively small canvas (small piece of land) to work on, with not enough room for everyone to “touch” at once. However, despite this seeming challenge they came together almost seamlessly to create art.

Tomorrow morning we will finish the mural and I will post the finished mural pictures. This piece will be one of the many art pieces on view during the Artsbridge Gala on August 6th, here at Boston College’s gallery. In the meantime, here are some pictures of the students in different phases of the project, and some of the almost finished mural.