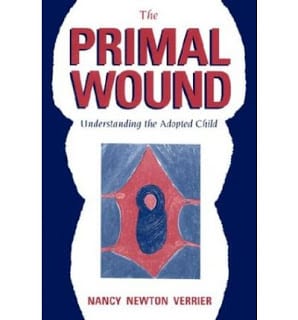 I have started to read a classic book on adoption (and geared towards adoptees) called The Primal Wound: Understanding the Adopted Child, by Nancy Verrier. Although the author is not an adoptee herself, she is the mother of an adopted daughter, as well as a biological daughter.

As I read, I am finding that the subject material and her descriptions of the adoptee’s unique position in life is definitely ringing true for me. I found myself nodding my head as I read, and feeling as if the book was written specifically for me! Here is an excerpt from her book that seems to summarize the main theme she explores:

What adoptees need to know is that their experience was real. Adoption isn’t a concept to be learned, a theory to be understood, or an idea to be developed. It is a real life experience about which adoptees have had and are continuing to have constant and conflicting feelings, all of which are legitimate. Their feelings are their response to the most devastating experience they are ever likely to have: the loss of their mother. Just because they do not consciously remember it does not make it any less devastating. It only makes it more difficult to deal with, because it happened before they had words with which to describe it (preverbal) and is, therefore, almost impossible to talk about. For many of them, it is even more difficult to think about. In fact, some adoptees say they feel as if they either came from outer space or a file drawer. To allow themselves the memory of being born, even a feeling sense of it, would mean also having to remember and feel what happened next. And that they most certainly do not want to do.

Many adoptees are adopted as infants. For years there has been a preconceived notion that babies could not possibly retain the emotional trauma of separation – after all, they’re “just babies.” However, scientific research in the field and countless testimonies of adoptees is proving that this early separation (perceived as the ultimate abandonment) leaves an indelible imprint on the infant. Since the experience is not consciously remembered, it floats in the background of the adoptee’s psyche, as a feeling of emptiness, loss, and confusion. As adults, we may feel an underlying sense that something is missing, even though we cannot come up with a single concrete reason for this feeling. Many adoptees struggle with depression, anxiety, and some with acting out inclinations. Often this behavior confounds the adoptive parents and health professionals, who can find no obvious reasons for this behavior in the adoptee’s external life.

As an artist, I am beginning to realize just how much of my work has been a searching for her face. In my depictions of floating figures and faceless apparitions, I have struggled to form an identity and a likeness for her. I look into my own face and features, and can only partially reconstruct what she may look like.

It is easy to take for granted the fact that most people know exactly who their biological parents are, and are therefore directly in touch with their lineage and their origins. For the adoptee, this basic and vital piece of information has been cut off and sealed away. And so the searching for her True Self begins…